My children’s favorite fruit is probably the pomegranate, or rimon, as they call it in Hebrew.   I must admit that I’m a pretty big fan myself.  And it seems that I’m not the only one.

Pomegranates seem to be the “newest thing” these days, almost as if they were just discovered.  The fruit is extolled for its health properties and its beauty is acclaimed.  The word pomegranate derives from the Latin pomum (“apple”) and granatus (“seeded”), perhaps because it appears 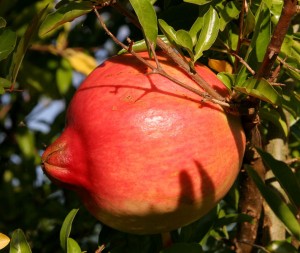 like an apple at first glance.  Yet it is distinguished by its leathery skin and crown – perhaps alluding that the pomegranate is “higher” than an apple, much like a crown is above the person who wears it.

Let us examine pomegranates in parsha, which this week is the reading of Tetzaveh.  Our portion discusses mainly the clothing that the Kohen (Priest) would wear while serving in the Holy Temple.

Believe it or not, despite the fact that the Torah uses the word “pomegranate,” there is actually a debate whether this part of the Kohen’s robe actually resembled a pomegranate!

Rashi, the 11th century French commentator, writes that, “the shapes were round and hollow, like a sort of pomegranate, shaped like hens’ eggs.  The golden bells had clappers inside them.  Between every two pomegranates, one bell was attached and suspended on the bottom hem of the robe” (ad loc.).

Nachmanides, on the other hand, doesn’t see eye-to-eye with Rashi.  Born in Spain at the end of the 12th century, Rabbi Moses ben Nachman was a Kabbalist and major commentator on the Talmud and Bible.

This debate is no mere triviality.

Yet why, after refusing to accept Rashi’s interpretation that the robe had individual pomegranate shapes on its edge, does he insist that they must be the shape of apples?  Why not oranges or another circular fruit?

Thus, since there is already a precedent for this shape being used for decoration, Nachmanides states that the robe – if indeed the shapes are merely decorational – should also be shaped like apples, consistent with the menorah.

On a deeper spiritual level, this debate also has significance.

Pomegranates allude to us as we stand on a low spiritual level, while apples refer to us on a higher level.  King Solomon writes that, “As many as a pomegranate’s seeds are the merits of your unworthiest” (Song of Songs 4:3), thus connecting the “unworthy” with the pomegranate.  Apples, on the other hand, refer to our inner nature, which remains holy and untained by sin.  The sweetness of an apple alludes to this spiritual “sweetness.”

Nachmanides, on the other hand, included explicit mystical teachings in his Biblical commentary, and thus said that the shape was that of an apple, because our inner nature is indeed “sweet,” regardless of how we may be behaving externally.

So next time you encounter a “pomegranate”, remember that deep down – and even etymologically – it is as sweet as an “apple.”