Chabad is a 501(c)3 not-for-profit corporation, but most people consider us more of a family than anything else.  Students dine in our home, facebook us to ask questions or share thoughts, know the names of our children, and don’t hesitate to call us on our cell phones, even late at night or on the weekends.  Chabad QC is the only organization at Queens College that doesn’t close — because families don’t close; we are open on the weekends, legal and Jewish holidays and during vacation.

Our extended family is led by our Student Board, driven by Shaul and Tzipah Wertheimer, and joined by countless students and alumni.  An integral part of our family are the hundreds of donors, comprised of alumni, parents and people just like you.  Please scroll below for more about Tzipah & Shaul.

Born and raised in Rockland County, NY, Tzipah was interested in Judaism from an early age.  She attended Reuben Gittelman Hebrew Day School and then went on the The Frisch School.

After graduating from high school, Tzipah went to Israel for a year of study at the Machon Gold College for Women, followed by enrollment at the University of Binghamton, where she was involved in the Chabad House and Hillel.  Completing her studies in three years, Tzipah again returned to Israel, to study in Machon Alte of Tzfat.  After a year of study, she returned to New York where she was introduced to Shaul.  They wed in November 2002 and embarked on the journey to Queens in November 2004. Tzipah has audio classes on Chabad.org, and has been published on the Huffington Post. 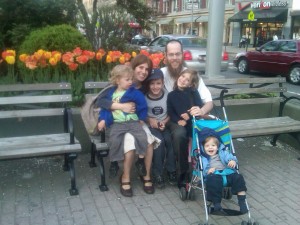 Shaul was born in beautiful Vancouver, Canada, and after a short stint there and in S.Diego, moved to Calgary, Alberta at 3-years-old.  He was the first student (one of two!) at Akiva Academy, and spent most of his time hiking, biking, playing baseball, street hockey and collecting baseball cards.  He also has partial ownership of a 2nd-year Wayne Gretzky card (his father and brother are the other partial owners).  During the summer before entering grade 10, the Wertheimers moved cross-country to Skokie, Illinois, where Shaul attended Ida Crown Jewish Academy.  He then studied Philosophy at Northwestern University, where he was an avid Phish fan, attending more concerts than you could imagine.

After college, Shaul spent a year painting and putting up drywall, then embarked on a European and Israeli adventure.  It was in Israel that he ended up at Mayanot, which ultimately led to five years of study at the Rabbinical College of America in Morristown, NJ. Shaul is a published author, with hundreds of articles and essays published in the Chicago Jewish Star. He has also written for Chabad.org, and together with Tzipah and his brother Aaron, produce the Queens Cuisines. Shaul is also a featured blogger on the Huffington Post.

Mendel – 8 year old philosopher, (check out minut mit mendel) acrobatic climber, Mendel enjoys school, swimming and making origami.  Mendel can be found hanging from just about anything high, learning Yiddish or using his mother’s phone to recite Tehillim….and take a glance at Angry Birds.  With his sharp sense of humor, serious side and taste for schmaltz herring, at times Mendel seems a bit beyond his years. *He is also the secret chef of the brownies at Chabad.

Shoshi – 6 year old spokeswoman for Chabad, Shoshi enjoys drawing gardens, listening to stories and is a fantastic conversationalist!   Her favorite food is pasta with melted cheese and interests include bike riding, reading and dressing up in costumes.  With a sensitive soul, she wonders who lit the first Shabbat candles in Gan Eden, call her grandparents every week to wish them a good Shabbat and loves to help her mommy.

Sruli – At just 3 and half years, this little guy makes a big impression.  Remarking that eyeballs grow on trees, inside his body live monsters, and cows have wings but they are so tiny that you can’t see them; Sruli has proven that his perspective on life is deep, thoughtful and unique.

Shmuel – Just shy of 2 years, his amazing smile has won the heart of many.  His favorite phrase in “Mama” and he loves to eat yogurt.  He has already shown climbing skills akin to those of his oldest brother and loves his mother’s cell phone.  In fact, forward thinking, yet “accidental” dispossessing of his mother’s phone into the garbage led her to purchase a nice upgrade.