The story is told of a certain aspiring Hungarian Jew who travelled to Lizhensk, Poland, hoping to meet with the famous tzaddik (righteous person), Rabbi Elimelech Weisblum (1717-1786). He had heard of the greatness of Reb Elimelech, and hoped to glean wisdom and inspiration from this famous Chassidic leader. 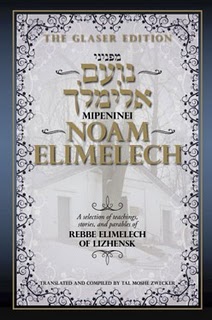 When he arrived in Lizhensk, he stopped a passerby on the street and inquired, “Can you please tell me where to find the home of the great Rebbe, Reb Elimelech?”
After inquiring as to the origins of the visitor, the local responded incredulously, “Do you mean to tell me that you travelled all the way from Hungary?! To meet Reb Elimelech?! Really?! Have the rumors of his alleged greatness even reached Hungary? I’m sorry to tell you, but I know this so-called tzaddik personally – and he is a gornisht, an absolute nothing! You have unfortunately wasted much time and money in your journey here.”
Quite taken aback, the visitor verbally attacked the man. “Who are you? How dare you insult the holy Rebbe Elimelech!?” Storming away, he muttered, “You obviously know nothing about spirituality and holiness!”
Later in the day, the visitor succeeded in finding the home of the great Rebbe whom he so eagerly desired to meet. He knocked on the door, and was astonished that the man whom he had earlier berated in the street was none other than Reb Elimelech himself!
The humbled visitor cried as he begged the great Rebbe for forgiveness for his verbal abuse.
“What’s wrong?” the tzaddik asked. “Everything I said to you in the street earlier today was true, and everything you said was also true. You have nothing to apologize for.”
This story sheds light on a great Torah personality and leader. Let us study his thoughts on this week’s parsha, Bo.
At the beginning of the parsha, after seven plagues, Moses and Aaron come to Pharoah and once again request that he let the Jews out of slavery. The threat? A plague of locusts will devour everything that remained from the previous plague of hail. Pharoah’s own servants were so intimidated that they beseeched Pharoah to release the Jews.
Moshe and Aaron return to Pharoah, who asks them, “Go worship your G-d. But exactly who will be going?”
In chapter 10, verse 9, Moses responds, “With our youth and with our elders we will go! With our sons and with our daughters, with our flocks and with our cattle we will go, for it is a festival of G-d for us!”
Pharoah refuses this request, and agrees to allow only the men to leave.
In his book Noam Elimelech (after which he is commonly referred), Reb Elimelech departs from the contextual meaning of this passage and verses, and explains Moses’ adamant statement (verse 9 above) in a different way.
Reb Elimelech explains that when one grows old, one does not want to be embarrassed of one’s actions while still young. The word “youth” in the verse represents one’s behavior while young; and the word “elders” represents one’s conduct while old. Thus, the verse means, on a spiritual level, that when one is an elder, he should still be with his “youth.”
The way to retain your “youth” even while aging, according to Reb Elimelech, is to avoid the “last-minute rush” and make sure to live an upright and moral life even while young and capricious.
When I first came upon this explanation, it seemed to me that it didn’t make sense. After all, why should one want to have the same attitudes, approach and behavior while old as when a youngster? Shouldn’t one always strive to grow? If nothing has changed from one’s youth to old-age, that’s not a good sign!
Even if one indeed was mature even as a youth, and able to live a life filled with holiness and meaning, one should hope that one has improved on this when one reaches an old age. Yet the Noam Elimelech seems to suggest that things should be the same when old as when young. What is the meaning of this?
I would like to offer the following explanation: The Noam Elimelech is clearly not suggesting that after living a full life, one should feel that one has remained at the same (albeit lofty) level of accomplishment. There is no virtue for keeping the status quo. Judaism is like a moving sidewalk: you’ve always got to move forward, or else you’ll ending up sliding back.
What the Noam Elimelech meant by his explanation of our verse, was not only that one should not be embarrassed of one’s youthful actions, but also that even when one grows old, one should attempt to retain certain child-like aspects of his personality.
Although people usually think of children as immature (not a virtue many are proud of!), there are certain advantages to a child-like outlook on life. Children, for example, take things at face value. Children are not jaded or tainted by negativity the way an adult can become. Children have a very pure and unwavering belief in the Creator.
In sum, the Noam Elimelech teaches us that when Moses told Pharoah that he would leave together with the young and old, he was also saying that while young, one should realize that the time will come when one will be older and will reflect on one’s life and accomplishments. Make sure that the life you choose is one you will be proud of. Moreover, make sure that as you age, you retain certain beneficial aspects of your childhood, such as faith, simplicity and positivity.