Stewart Lieber is a Captain in the NYC Police, Bronx division. He has three children, Joel, Robyn (Rivkah) and Gela. Rivkah and Gela both went to Queens College and were active members of Chabad.

Where were you born and where did you grow up? 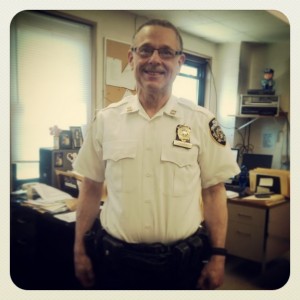 Born in the Bronx, and grew up in the Bronx. I lived there until 1999, and then I moved to Yonkers and then Pleasantville.

Can you tell me something about your likes or dislikes?
I like lifting weights, kettle bells; I have an elliptical. A couple years ago, I lost 110 pounds.

That’s amazing! How did you do that?
I ate a lot less, stayed away from carbs. My doctor told me I needed to lose weight, so I made it my business to lose weight after that. I only started exercising after the first six months. At that point it was more cardio, and now I do more weights.

Why did you send your daughters to Queens College?
It has a good reputation as a good academic school. It’s a good value.

How long have you been in the Police force?
31 years.

What do you like most about it?
The people I work with. Sometimes you have problems that you have to deal with, and it feels good that you can help fix problems. Also, I work the night shift, and sometimes you see people get off the subway and they look scared; when they see you sitting there in the car, they feel better. That’s a good feeling.

Can you share an interesting Police story?
I worked in Williamsburg for a couple years, and that was interesting. I spoke a little bit of Yiddish, and there was always some place to eat there.

What is your proudest moment as a dad?
That all three of my children keep Shabbos.

Have you ever been to Israel?
No.

Would you like to go?
Sure! I have a nephew who moved there and is in the army.

Anything else you would like to add?
On Shavuot I went to my friend’s synagogue, and the rabbi spoke about how Jews are such a small percentage of the population, yet we have so many scientists, scholars etc. In Korea, they even started studying the Talmud! The rabbi said that we should all start studying Talmud, so I went and bought the first volume and have been studying it.

Are you enjoying it?
Yes. I didn’t have a yeshiva education, but if you read it over a few times, you can understand it. Lots of different opinions! It makes you think.

On a different note, I was once in Crown Heights visiting my daughter Robyn who lives there. It was the holiday of Sukkot, right around my birthday, and I was getting a pair of tefillin. The sofer (scribe) wasn’t there, so I had to come back for them to adjust the fit. But there was another rabbi there, so he volunteered to adjust it to the proper fit. So that was very nice.

Since we’re talking about mitzvos, why do you think tzedakah (charity) is so important?
Because everybody – how do I put it – unless you’re Bill Gates or Donald Trump, there’s always someone who has more financial problems than you. When I send a donation to Chabad, I think of all the times I asked my daughters, “What are you doing for Shabbos?” And my daughters would say, “Chabad!” And I want others to have the same opportunity.

That’s very beautiful! Thank you!
Some people may not have had the opportunity to explore their Jewish roots. You make them feel at home, make them comfortable. And it’s something we’re supposed to do.