Brief raffle update: As of this morning, we have sold 231 tickets in the raffle. Last year, we sold 430, and the raffle closes on July 9th. Our goal is 500. The proceeds from every ticket sale stay right here in Queens. Please visit the raffle site at www.QueensRaffle.com and buy a ticket (or 2, or 5 or 10!). Become partners with me and Tzipah in our outreach to students.

Mazel tov to Chaim & Pirchi Kurz on the birth of a son last night!

Days after the calamity, I really don’t have much to say. The families of Eyal, Gilad and Naftali are still sitting shiva. 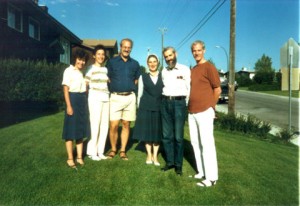 The entire Jewish nations mourns. This is not mere hyperbole.

While we are separated by thousands of miles, we do not feel far away.

In fact, there is a connection to Queens. Aviezri Fraenkel, the grandfather of Naftali Fraenkel hy”d, was a visiting professor at Queens College a few years ago. Prof. Fraenkel is a world-renowned mathematician, founder of the Bar-Ilan Responsa Project, winner of the Israel Prize, and was very active on behalf of Soviet Jewry.

I have another, more personal connection, as well. Prof. Aviezri, his wife Shaula and youngest son Yishai, spent a year in Calgary in 1983-4, when Prof. Fraenkel was a visiting professor there. We attended the same synagogue, and Yishai babysat for me and my brother.

When our family traveled to the Land of Israel in 1986, we visited the Fraenkels in their home in Rechovot. I have vivid memories from the trip. The Fraenkels visited Calgary later that year (see picture at right).

Yishai is now an executive at Intel in Jerusalem, and was recently quoted in many news outlets, condemning the murder of the Arab youth earlier this week. Yishai has accomplished incredible things; read this amazing article about him.

But we can’t mourn forever. What are we supposed to do?

On April 12, 1956, two terrorists murdered five young students and their teacher in a school in Kfar Chabad, Israel. The community was broken — some even suggesting that the village should be disbanded — and wrote to the Rebbe for guidance.

The Rebbe sent letters and telegrams of comfort in the days following the tragedy.

Not one to settle for words alone, the Rebbe personally selected 12 yeshiva students to travel to Israel to offer comfort and inspiration. En route to Israel, they visited Jewish communities in England, Belgium, France, Switzerland and Italy.

In the Holy Land itself, the Rebbe’s representatives were based in Kfar Chabad, and visited communities and leaders all across the land.

My personal takeaway from this story is the importance to visit others in need, and to go out of our way to “be there” for anyone.

The second Lubavitcher Rebbe said that it is vital to have a good friend with whom one can speak about matters of the spirit, for then the G-dly Souls of each person join forces with each other, giving a person added strength.

May we merit to stand together in unity, not just in times of tragedy, but also during times of joy. May our unity and brotherly love hasten the coming of Mashiach, who will “wipe away the tears from all faces.”

Vignettes of My Week