Enter any Judaica store this time of year, and Chanukah supplies abound.  The ubiquitous dreidels are nowadays also flanked by all sorts of other sundry items – some more useful than others.  A wide selection of Chanukah books for children and adults are readily available in just about any language; Chanukah games, posters, music, and, of course, menorahs and every color candle you can imagine. 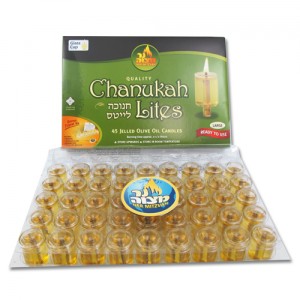 In recent years, another interesting Chanukah product has appeared.  You don’t have to look carefully to find triangular shaped packages which contain little glass “candles,” pre-filled with olive oil and wick.  Just snap off the top of the sealed container, and presto!  You have a ready-made olive oil candle to be placed in a menorah.

The Code of Jewish Law explains that when choosing which medium to use for your Chanukah lights, olive oil is preferable over wax candles, for the original menorah in the Temple was lit with pure olive oil.  Additionally, as everyone knows, the miracle of Chanukah took place with olive oil.

That being said, these pre-filled olive oil containers seem great – for they require zero effort to light your menorah in the preferred manner.

Yet something about it just doesn’t sit right with me.

So these “easy” menorahs irk me a little.  In fact, when thinking about what to write for this week’s Torah column, which coincides with the parsha of Mikeitz as well as the holiday of Chanukah, I think I found this very idea illustrated in the parsha.

At the beginning of this week’s parsha, we read of two dreams by Pharoah.  Please permit me to delve into this fascinating topic.

The Torah spends seven verses telling us the details of Pharoah’s dreams.  Seemingly, what is relevant is not the details of the dreams, but the interpretation of the dream (offered by Joseph).  Why does the Torah bother to recount the details of Pharoah’s dreams?  Wouldn’t it have been sufficient to merely state (in one verse!) that Pharoah dreamed; none of his dream interpreters were able to solve them; along came Joseph and explained that they refer to seven years of bounty which will be followed by seven years of famine and drought.

One might think that we could just as easily ask this exact same question about all the details of Joseph’s dreams: Why are they relevant?  However, it is easier to understand why it is important to know the details of Joseph’s dreams, for he was one of the greatest Jewish leaders!  However, Pharoah was one of our biggest enemies and oppressors!  What do we care what he dreamt about?!

Why the need to recount the details of Pharoah’s dreams?

As I mentioned in last week’s column, Joseph’s dreams follow the Talmudic dictum of “ascending” in matters of holiness, by first dreaming of earthly things (sheaves of grain), and then dreaming of heavenly things (stars, moon, sun).  Pharoah, on the other hand, dreams first of the animal kingdom (the seven fat and seven skinny cows) and then “descends” to the plant kingdom (seven healthy and seven sickly stalks of corn).

And the distinctions continue.

In Joseph’s first dream, we read how he and his brothers were “binding sheaves in the middle of the field,” which indicates the idea of work and effort.  Additionally, the sheaves of grain each started out in their own individual hole in the ground.  Joseph’s efforts consisted of removing each individual sheaf, and binding them together with the others, thus creating unity.

In Pharoah’s dreams, we do not read of any effort. In fact, Pharoah is depicted as, “standing by the Nile.”  Not doing anything.  In the second dream, we then read of “seven healthy and good ears of grain were growing on one stalk, and… seven thin ears of grain, parched by the east wind, were growing up after them.”

Although at first glance, Pharoah dreamed of grain just like Joseph, but there is a marked difference: As mentioned above, Joseph’s actions involved the idea of binding sheaves (which were previously unconnected to each other) together – the idea of unity.

Pharoah, however, does nothing himself, and the grains remain standing individually, rather than being brought together in a show of unity.

Both of Pharoah’s dreams conclude in the same way: the bad swallows and consumes the good.

Perhaps this is what vexes me about the ready-to-go Chanukah oil candles.  There just seems to be something precious about preparing your menorah before candle lighting, by pouring oil into a glass container; cutting the wick to size; inserting it in the oil, and then pronouncing the blessings and doing the lighting.  The effort exerted seems to make things more precious.

Not that there’s anything wrong, per se, with these prefab Chanukah kits.  It just seems to me that Joseph would prefer if we worked a bit, following his example.