Nachum of Gamzu & the Ark

Nachum of Gamzu & the Ark

Nahum of Gam Zu lived at the end of the Second Temple period.  He was a righteous man who led a very difficult life.  He was blind in both eyes, both his hands were cut off, his feet amputated, and his entire body was covered with boils.  He was so helpless that the legs of his bed had to be placed in bowls of water so that ants would not climb up the legs of the bed and bite him. 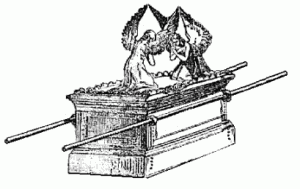 One day, his students inquired what he had done to justify the suffering he endured on a day-to-day basis.  Nahum told them his tale of woe:

He was traveling to his father-in-law’s house, and his possessions were distributed amongst three donkeys; one carrying food, one carrying drink, and one carrying all sorts of delicacies.  At one point he stopped to rest along the way, and he was approached by a poor man asking for something to eat.  Not realizing how desperate the pauper was, Nahum responded, “Wait until I have unloaded the donkey.”  Before Nahum had the opportunity to unload the donkey, the man died of hunger.

Nahum was not calmed until he said, “Let my entire body be covered with boils.”  In this way, Nahum explained to his students that he had brought his suffering upon himself, hoping to gain atonement through his suffering.

Although Rabbi Yosef Caro (1488-1575) does not usually mention stories in his universally accepted codification of Jewish law, the Shulchan Aruch, this poignant story appears in his laws of Tzedakah, or charity.  He writes that one “must be very cautious [with giving charity] because it is possible that one could come to spill blood, that a pauper could die if you don’t give him immediately, like in the case of Nahum of Gam Zu” (Y.D. 247:1).

This unusual reference in the Shulchan Aruch draws attention to how important it is to give tzedakah at one’s earliest opportunity.  Since it is so unlike the style of Rabbi Caro to mention Talmudic stories which have no bearing on the practical law, the appearance of this story is of particular note, and must be taken as a life lesson in the importance not just of giving charity, but of doing so with alacrity.

In fact, this lesson applies not only to actual monetary charity, but also to spiritual tzedakah, that is, helping another person in need by doing a favor.  For this lesson, we turn to this week’s Torah portion, Terumah.

Terumah is the first of a group of portions which discuss the Tabernacle (the traveling Temple in the desert) and the utensils within it, such as the Menorah, the Altar, and the Table of Showbread.

One of the utensils was the Ark, which contained the Tablets of the Ten Commandments.  It was a wooden box, with a golden case on the inside and out.  The lid was likewise of gold, and upon it were the two cherubs.  There were rings on the sides of the Ark, through which passed two poles to carry it.

With regards to the Ark, there is an interesting prohibition, which is one of the 613 commandments: “The poles of the ark shall remain in the rings.  They must (never) be removed from it” (Exodus 25:15).

What is the purpose for such a prohibition?  Do the poles really affect the status of the Ark itself?  Certainly the poles are merely for pragmatic reasons, that is, transporation.  Why is it so crucial that they never be removed?  When the time comes for travel, let the poles be inserted.

Readers of this column may be familiar with the Sefer Ha-Hinnukh, the compendium of explanations on the 613 commandments by an unknown Spanish author of the 13th century.  Written by a father to his son as a guide to his fulfillment of the mitzvot, or commandments, it is a book I am particularly fond of for its beautiful linguistic style.

In his discussion of this prohibition, he writes that since there would be occasions when we would have to transport the Ark and its contents quickly for some reason (such as in the case of war), it is important that there should not be any delay in such times of need.

One might ask, however, what relevance does this ancient law have?  We no longer have an Ark or a Temple, so why should I be interested in this prohibition?      The answer, the Hinnukh writes, is that just because we are in a temporary historical state where we do not have an Ark, this does not affect the eternal status of the Temple and all concerning it.  Nevertheless, the question remains how to apply this prohibition to our daily life.

Each one of us is an Ark.  Just as the Ark housed the Tablets, so too, we are a home for the Torah and spirituality.  A person may think that when he is involved in his own spiritual pursuits – meditation, prayer, Torah study or the like – he need not be concerned with another.  “This is my personal time,” one may think.  “This is my time to work on myself.  First let me take care of my own needs before I extend an arm to help a friend.”

A person may be at the height of spirituality, he may feel that he is in the Holy of Holies on Yom Kippur, with regards to his spiritual pursuits. Yet one must always “keep the poles in the rings of the Ark,” that is, be constantly aware of any possibility to help another that is presented to him, and react quickly and accordingly.  One must always be ready to travel with his “Ark” to help another.

To Live By Them