PURIM PARTY IS AT CAPACITY – WE CAN NO LONGER ACCEPT RESERVATIONS.

THERE ARE MANY LOCATIONS IN QUEENS WHERE ONE CAN HEAR THE MEGILLAH.

INCLUDING BUT NOT LIMITED TO: 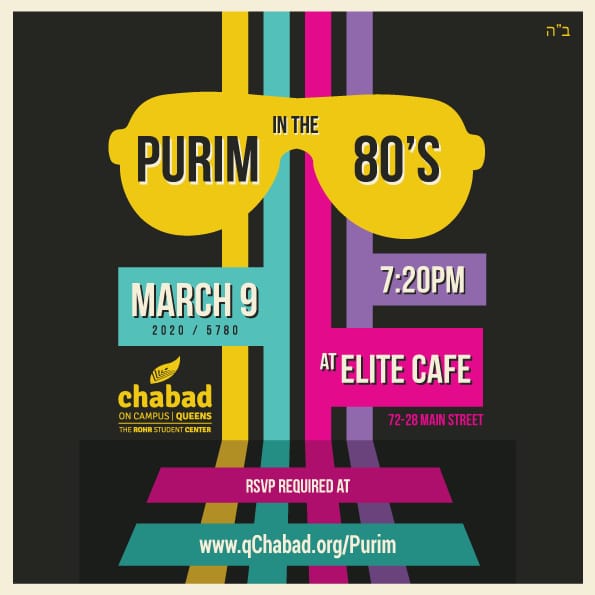 Join us for Megillah reading and a fabulous Purim party at Elite Cafe!  Chabad is renting out the entire restaurant just for QC students.  RSVP required in advance, bring your student ID.

Esther as a Beauty Queen

Esther was the ultimate beauty queen.  Chosen to wed by the king of 127 nations, the most powerful man in the ancient world.  King Ahchashveirosh had one major criteria for a wife in mind and it was skin deep – physical beauty.

So Esther became the Queen of the world simply because of the way she looked – what an insult!  I am reminded our trip to Vienna that Shaul and I were fortunate to take last year.  We helped run a Shabbat retreat for European young professionals and also had some time to check out the city.

Empresses Sissi is quite a fascination to the Austrian people.  At the age of 16 she accompanied her older sister who was set to have her first meeting and ultimately marry the future Emperor Franz Joseph I.  The family had just come from a funeral and were wearing black clothes.  The bride to be did not look particularly nice in black, yet the young Sissi was stunning.  The Emperor was taken by Sissi and chose to marry her instead.

Their story is fascinating, and unfortunately Sissi was ultimately miserable.  She had never intended to marry one of the most powerful men in the world.  She abandoned her post, traveled as much as she could and was apparently anorexic.   The pressures of such an imposed lifestyle are impossible for me to imagine – and  it would be totally unfair to judge her.

Esther was placed in a very intense position.  Her inner talents and intellect were totally ignored.  She was thrust into a life she had never imagined and had to make much sacrifice including her marriage to Mordechai – but she didn’t crack, she saved her entire nation.

Esther instructed the Jews to fast and repent in order to annul Haman’s evil decree to destroy the Jewish people.  She also fasted for 3 days, which would obviously diminish her beauty, before approaching the king uninvited.

Most people dress up for an interview – how much more so should Esther have made herself beautiful before risking her life by pleading with the king, to save the Jewish people.  This was a king who seemed to only value her for her looks.  But Esther never seemed to lose sight of the real King and indeed she did beautify herself!  She fasted, repented, and instructed the entire nation to do the same thereby beautifying themselves spiritually.

She didn’t abuse her power, she didn’t run from fame – she saved the Jewish people.  She kept her eye on the goal at all times and was able to see the spiritual within the everyday.

You Are So Ugly!

You've Got It All Wrong

More from the Blog

Can cocaine be used for a mitzvah

Some time in the early 1900s, R. Aharon Shmuel Lichtig of Krakow posed a halachic inquiry to the Galician Torah...

Chabad is excited to offer students delicious homeade honey cakes for Rosh Hashana.  Sponsered by the Goldfeder family for...

Danielle comes upstairs.  I think it’s just to say ‘good Shabbos,’ but she’s wearing a look of worry as well...

West Hempstead Get Together