I spent this cold and miserable week in a better place….AKA Florida.  With apologies to those who spent this week in the library cramming for finals, I must say that the sunshine was great!  Chabad on Campus invited a small group of Chabad campus rebbetzins to join a retreat of rest, and spiritual growth at the end of a long semester – yes we feel the work of the semester too :).  I am quite grateful for such a wonderful opportunity. 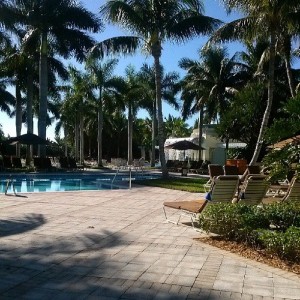 The retreate was a couple hours from Miami and, I flew into a small airport in Fort Myers.  The flight selection was sparse so in the end I booked 2 separate one way flights.  I went south on Delta and back north on JetBlue.  A completely different experience!

JetBlue took the antiquated drink cart filled with stale ice and lackluster stewardesses and tossed it out the window.  A chipper (non-mini skirted) JetBlue employee asked me what I’d like to drink – she returned with my selection sans oversized cart.  I made sure not to leave behind my mess because they announced that the staff who served us would also be cleaning the plane.  It’s always rude to leave behind garbage – but when you know exactly who will be picking up your trash you’re even more careful.

I spent my plane rides looking over the weekly Torah portion in accordance to a specific schedule called chitas that I follow.  I flew down on Monday to the tune of the most famous midwives in the world explaining to Pharoh that the Jewish women are strong and unlike the Egyptians – by the time they arrive, the laboring the women have already delivered.

On Tuesday I caught myself thinking about the immense sacrifice of Yocheved [the mother of Moses].  While she was afforded a few years to nurse her baby once he was found by the daughter of Pharoh – she none the less had to turn over the boy to the palace at a tender age.

On Wednesday (on Jetblue) I was reassured that Moses’s adolescence in the palace had not affected him.  He drank of his own mother’s milk and he was imbued with the fullest sense of identity that anyone could have.  He killed an Egyptian slave master that was harassing a fellow Jew.  He was punished by Pharoh, in whose courtyard he had been raised, with the death penalty.  His neck turned to stone and the sword could not penetrate.  He escaped the evil land and was subsequently beseeched by G-d to become the savior of the Jewish people.

He could have left the mess behind, he could have bemoaned his sour fate, and he could have simply embraced the good life in Florida….or Midyan.  Moses becomes the greatest leader to have ever lived.  He went back to the turmoil and the mess of ancient Egypt and made sure that nothing was left behind.

As you conclude this semester, or perhaps your time at QueensCollege, and venture off to places like Florida, take a look around and make sure that the loose ends are tied.  No body intends to leave their mess behind but sometimes it’s just so much easier to run ahead without looking back.  A true leader takes care of everything, small details included.

Shabbat Shalom & we’ll see you when you get back!