After such an amazing Chanukah, I was hoping to be able to write an inspired weekly email.

After all, we distributed 165 free Menorahs & dreidels and 7260 candles to students. Mostly Queens College, but also S. John’s University and Queensborough Community College — and, of course 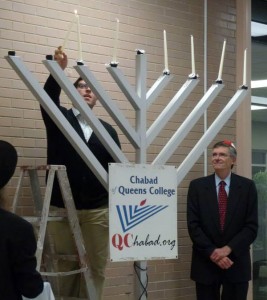 s; had our minds read by mentalist Marc Salem at the Chanukah party on campus; delivered homemade chicken soup to students under the weather; and partied with the Greeks — AEPi, that is.

But I’m tired. And my back is aching.

I got back late last night after a full day of learning Torah one-on-one with students, raising funds for the operational budget of Chabad (I’m trying to finish 2013 in the black!), driving carpool, and Sinai Scholars graduation.

I arrived home around 9pm to find my wife in the process of giving away an old couch to a QC alumna.

It was time to say goodbye to Mr. Couch; he was shiny and beautiful when we bought him as newlyweds. Yet after four kids, magic marker, crayons, orange juice and a few other contributions from our children that I would prefer not to speak about, we bid adieu. So I helped load Mr. Couch into the back of our car, and drove it over to her apartment a few blocks away.

With the help of another able-bodied young man, we proceeded to hoist the couch up the flight of stairs. But we couldn’t manage to have it turn the corner into the front door. It was a very tight fit. So we took Mr. Couch back down the stairs, and brought him up again at a different angle.

I was sure it would fit. The doorway was smaller than most doorways. So I took the door off the hinges. Luckily, I keep a flat head screwdriver in the car, for situations just like this.

No mater what we did, we just couldn’t get the couch to turn the corner into the door. 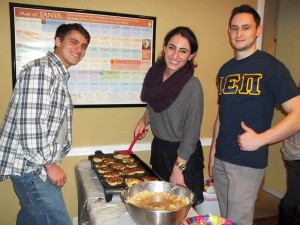 To make a long story short, I’m older than I used to be (in a recent conversation with my grandmother, she remarked that she’d never met anyone who got younger), my back aches and I’m tired. And the couch is on my front curb, waiting for garbage pickup this morning. I guess it just wasn’t meant to be.

What’s the point of all this?

I’m not sure. Like I said, I was hoping to write an inspired and inspiring email. Perhaps I at least made you chuckle.

Meet me in Miami