One Pesach, it seemed to the Chassidic master Rabbi Levi Yitzchak of Berditchev, that he had performed the Seder with all the proper intentions. It was later revealed to him from On High that he should not be so proud of his Seder, for in the very same town there was a Jew named Chaim, who made a more beautiful Seder than he did. 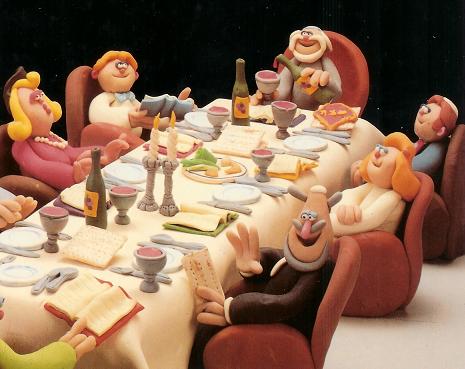 That evening, many of the Chassidim came to Rabbi Levi Yitzchak’s home to observe the actions of the holy rabbi. The Berditchever, as he was known, inquired if the Chassidim knew a local named Chaim. One visitor responded that he indeed knew Chaim, but did not know where he lives.

“If you are able to bring this Chaim to me, I will be very pleased,” said Rabbi Levi Yitzchak.

The Chassidim immediately scattered through the streets of the town, until they succeeded in finding Chaim’s home.  They knocked on the door. His wife answered.

“What do you want from my husband? He is passed out drunk on his bed.”

The Chassidim paid no attention to her words, and managed to rouse Chaim from his slumber. They carried him on their shoulders to the Berditchever, who told the Chassidim to bring Chaim a chair.

“My dear Chaim! Did you recite the Haggadah on the Shabbos preceding Pesach [as is the custom]?”

“Oy Rebbe! I must tell the truth! On the day before Pesach, I found out that it is forbidden to drink vodka for eight straight days, so I drank enough this morning, before Pesach, to suffice for those days. Afterwards, I fell asleep. When the night came, my wife attempted to wake me up, and she said, ‘Why aren’t you making a Seder like everyone else?!’ I told her, ‘What do you want from me? I am ignorant; my father was also ignorant, and I don’t know anything. All I know is that our fathers were slaves in Egypt, and we have a G-d who took us out to freedom; and I know that we are still in exile today, but G-d will once again redeem us from exile.’ Afterwards, I saw matzah, wine and eggs on the table. I ate the matzah and the eggs, I drank the wine, and was so tired that I fell asleep again.”

Rabbi Levi Yitzchak heard these words, told the Chassidim to take Chaim back home, then proclaimed, “His words were very pleasing in the Heavens, because he said them truthfully, without any ulterior motives and with complete intention, for he didn’t know any more.”