Tzipah and I are back in Queens; it’s good to be home! A big thank-you goes to my in-laws and parents who watched our kids while we were gone!

I feel so fortunate to have been able to join the Bayit program in Vienna. Rabbi Moshe and Tova Starik organized a first-class event with first-class people.

With regards to the lectures and discussions that I led, and the conversations with so many of these young European Jews, I am not surprised that I can reference the Talmudic dictum that “I have learned more from my students than any one else!”

We returned Stateside with a sense of inspiration at the resolve and dedication of these young Jews who grew up behind the Iron Curtain, under Communist rule, and against the backdrop of Hitler.

Of all the stories that I could share, here is one:

Levi and David are originally from Zaporozhye, Ukraine, and their families moved to Berlin, where they currently reside. 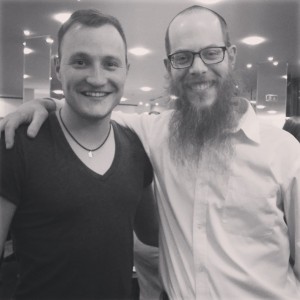 Levi (pictured at right) told me that growing up, he and his brother David did not know they were Jewish. I inquired how they made the discovery and he told me that many years ago, some Rabbinical students were sent by the Rebbe to Zaporozhye to distribute handmade shemurah matzah before Passover.

When some of the older Jews saw the matzah, they said, “We remember the matzah!” They were reminded of their childhood, growing up in Jewish homes.

Communism attempted to remove Judaism from the Jews.

The matzah brought it back.

Levi told me, “This is what started my interest in Judaism!”

Perhaps this story can explain the meaning of the statement from the seminal work of Kabbalah, the Zohar, that matzah is called, “the Bread of Faith.” The typical understanding of this concept is that by eatingmatzah on Passover, one is, so to speak, digesting and internalizing faith in the Almighty.

But maybe the matzah is actually so powerful that it can awaken faith just by being seen!