Our oldest son came home from sleep away camp a couple of weeks ago from CGI Montreal.  Amid sports, trips, lots of learning, late nights and boating he also took an optional class on baking!  What did he make?  Rugelach.

So with our in house expert, we decided to give it a try.

Mendel and I snuck away 10 minutes in the kitchen, the day before, when everyone else was busy and made a yeast dough.   We stuck it in the refrigerator over night.

On baking day my parents graciously took the kids to the Bronx zoo, while Shaul and I had an important appointment and the dough sat happily in the fridge.  The dough was a bit hard, so I took it out and put it on the counter around 3pm.  We got started closer to 7:30pm.  *Grandparent zoo trips are optional for this recipe, but highly recommended.  With a quiet house, I made a filling of chocolate, sugar and cinnamon in the food processor. 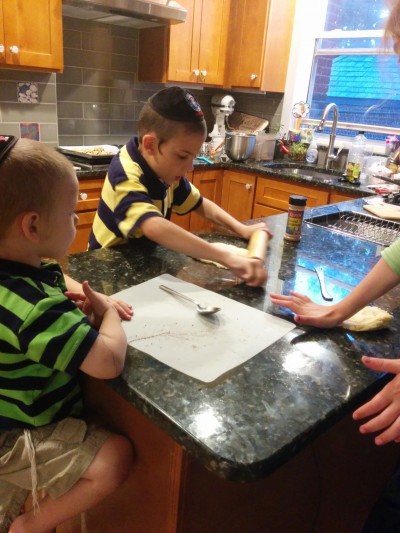 4 exasperated kids came in the house just before 7pm carrying zoo maps and tales of bug carousels.  Apparently some over eager father put his daughter on the lady bug even though my daughter has tried to save it for herself so that she and her brothers could all sit in the same row.  You have to wonder what kind of a person nabs a lady bug from a 9 year old girl.  Well, that tale of heartbreak and other highlights were discussed over omelets with cheese.

With a bit of protein in their systems and some renewed energy, we ventured onto our planned baking extravaganza.

As a child, I was always annoyed at the time wasted reading instructions before playing board games.  I continue to find recipes a necessary evil.  I’ve submitted to the fact that throwing everything into a bowl doesn’t usually work, but I have little – and I mean very little – patience for minutia and details.  I did not want to offend my child by opening up a cook book and looking at some nerdy diagram – so we simply began.

I gave Mendel a chunk of dough and then began to look in every cabinet for the rolling pin.  It was not with the meat pots nor the dairy pots.  It was not in the drawers that I haven’t figured out what to use for and therefore use to store random useless items.  Mendel checked in the high cabinets over the oven and fridge and then he gave up.  I continued searching in the obscure cabinet above the pantry.  Mendel resolved to work the dough with just his hands.  I found a bottle of arak – which my husband uses for his fennel chicken – perhaps I’ll post a recipe for that one day.  Bam, we started rolling the dough with the glass bottle of arak into a circular shape. 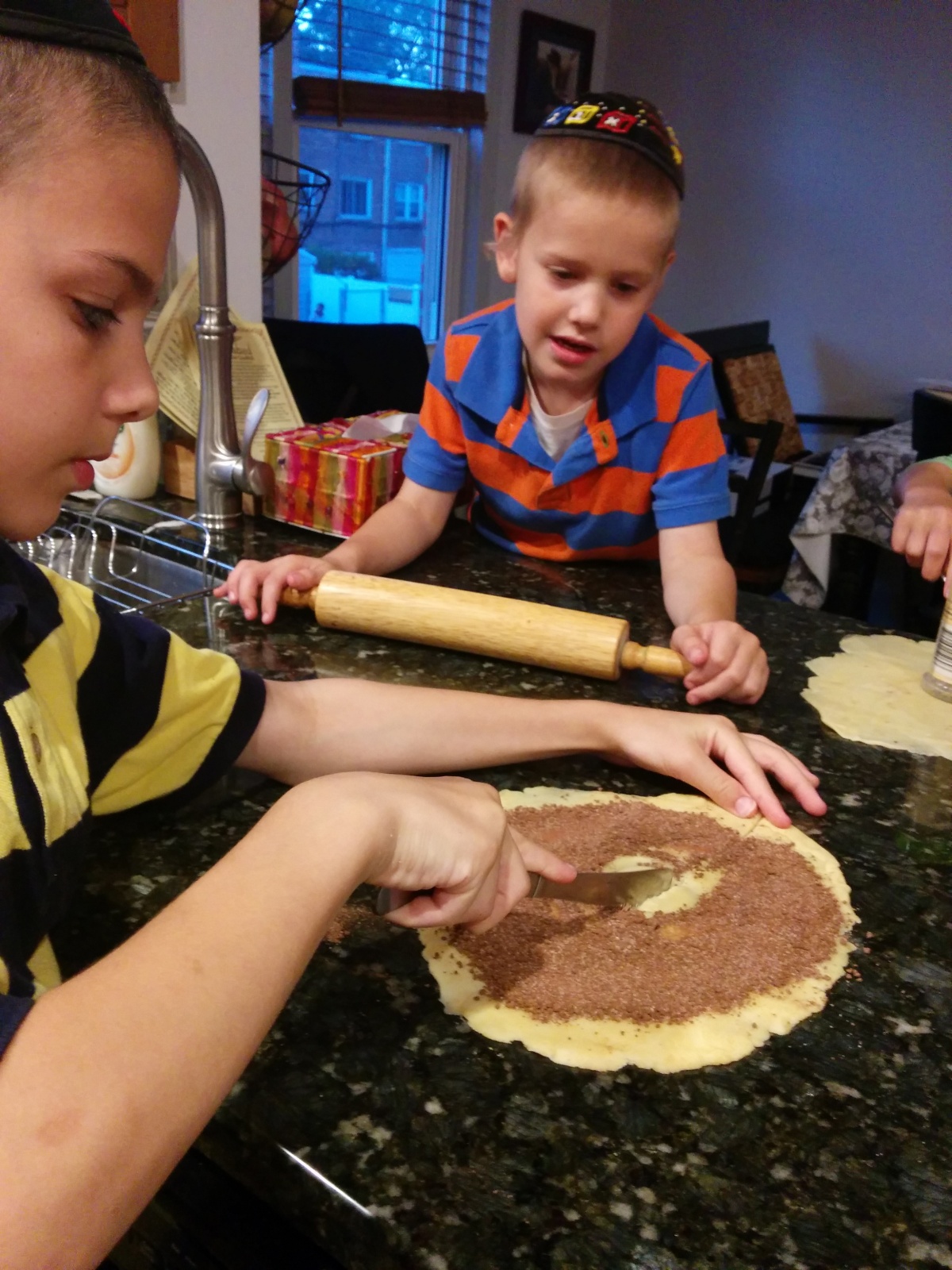 Mendel said that it was time to cut the dough and wanted to use our cake saw.  We opened the utensil drawer and found the rolling pin!  We used a butter knife instead of a cake saw.  Mendel said that we must put a circular object at the center of the dough before spreading the filling and grabbed the container of cinnamon. 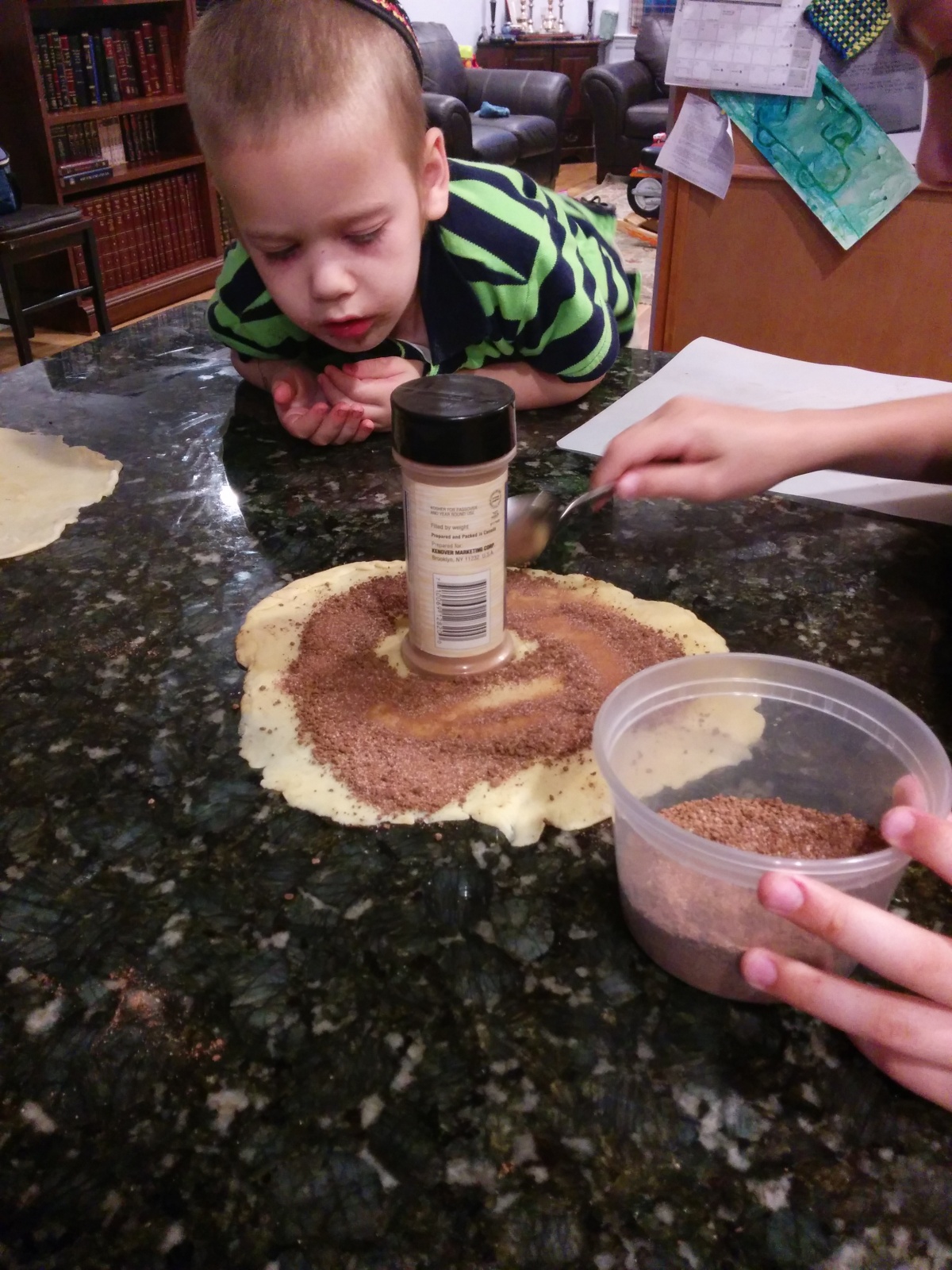 “No you cannot help,” Mendel and I told his 3 younger siblings whose grabby hands threatened to ruin the entire endeavor.  He spread the filling, cut the dough and began to role.  Ok, we let the other kids help roll the rugelach.  We’re not so mean.

The first eight were done and then I handed a second chunk of dough to Mendel and a third chunk to Shoshi.  Each kid got to make their own pie.  Shmuel was starting (read continuing) to drive everyone crazy so we gave him the job of painting the rugs with egg.  Sruli, who had thus far been entertained by eating scraps of chocolate filling and bits of dough decided to get in on the egg action as soon as he saw his little brother’s success. 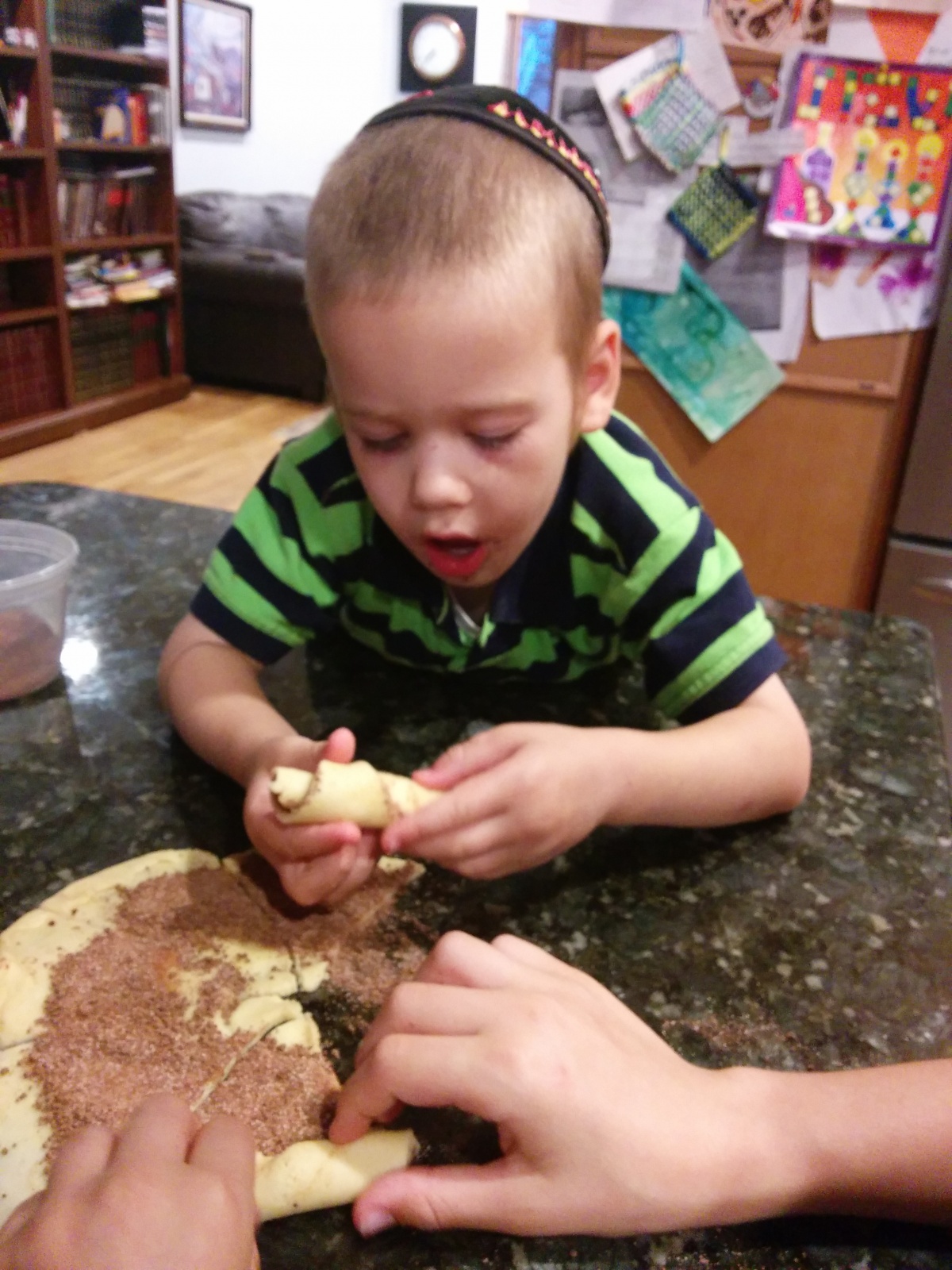 Mendel decided to sprinkle the leftover filling on top of the painted rugs.   They baked for 15 minutes which was ample time to demand that everyone get into p’jamas.   I have no idea who/how shmuel got into the diaper that he wears at night but somehow with rugelach on the other end of the rainbow it all fell into place quite nicely. 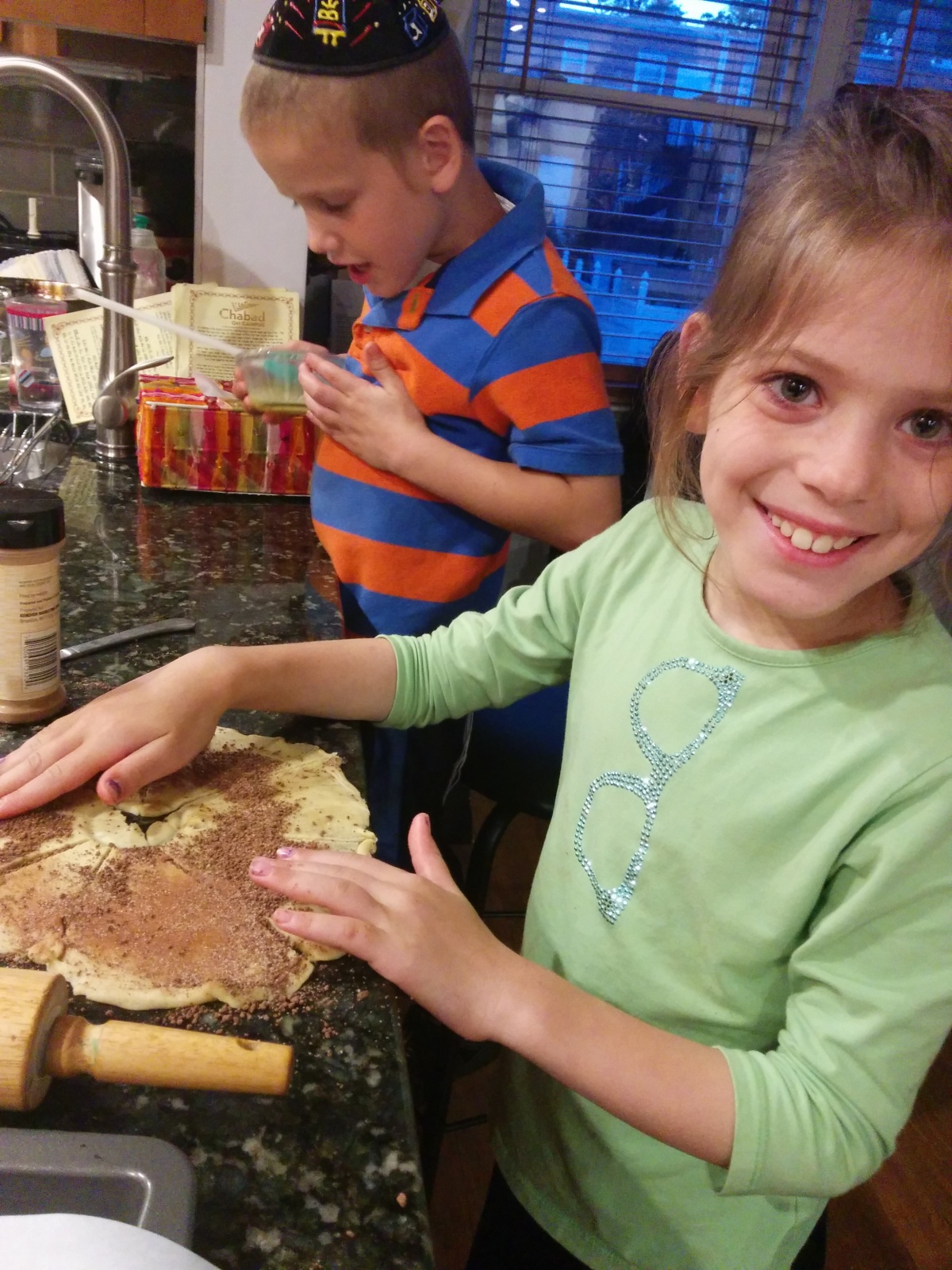 The house smelled fantastic, the rugs were delicious.  The smaller ones were a bit crispy while the bigger ones were fluffy.  We are not perfectionists – if a section of dough was thick the rugelach came out fluffy and if it was thin they came out a bit crispy.

“Aren’t they delicious,”  I said.   Everyone agreed and wanted seconds.  “Better than camp?” I innocently asked.  “No the ones in camp were better,”  Mendel said. 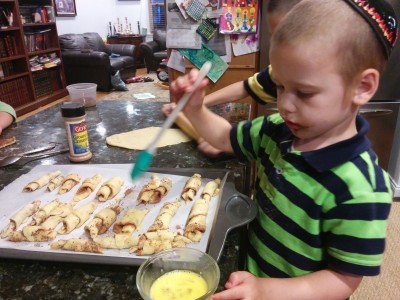 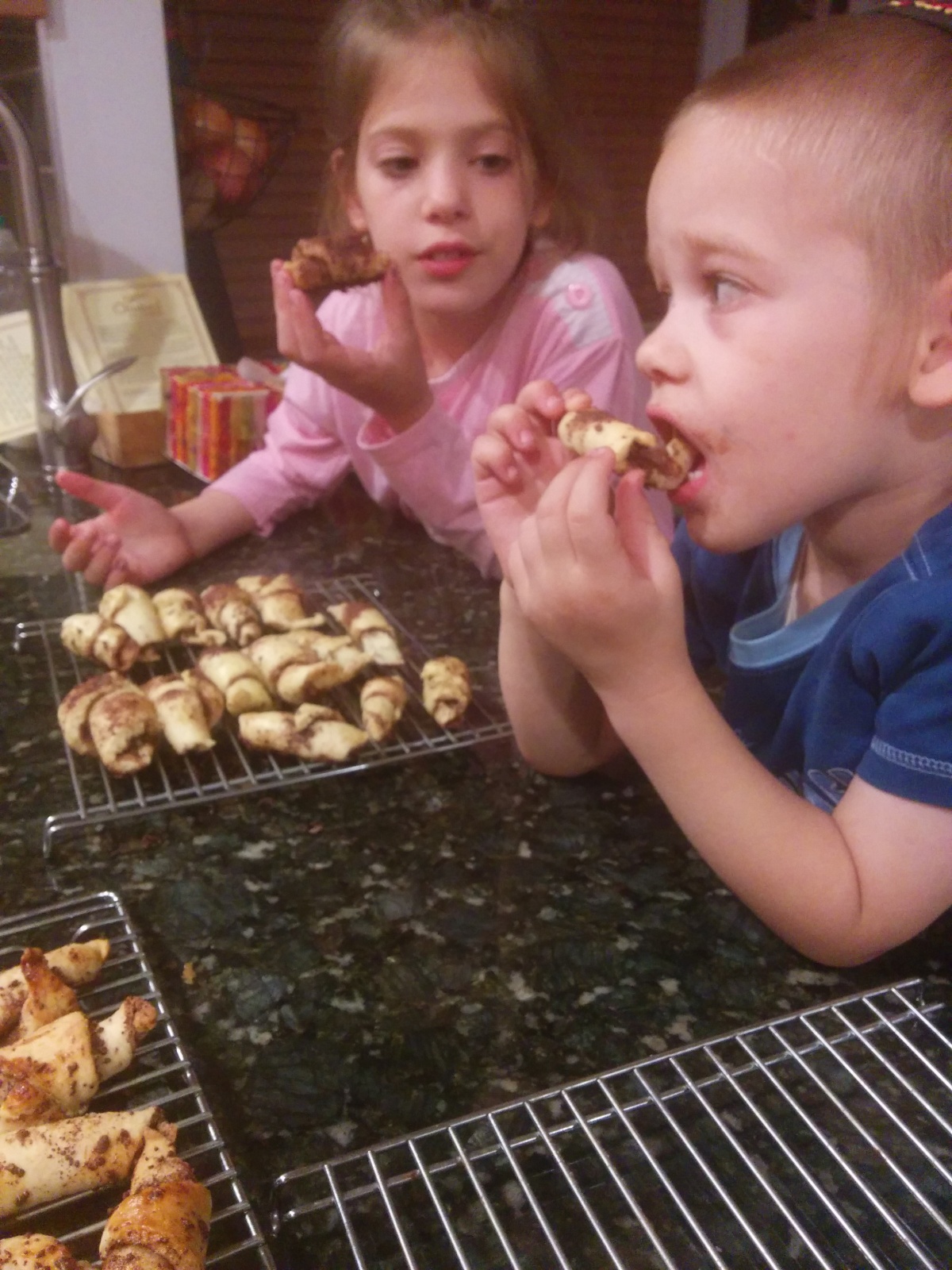 1 tbls (or package) of dry yeast

Combine yeast and water allow to sit for a few minutes.  Make sure that the yeast begins to foam.  Once yeast is ready add eggs,  flour, melted margarine and sugar.  Mix well – or use a kitchen aid with the cake paddle.  Refrigerate dough overnight – or a few hours.  Take out of the refrigerator at least 2 hours before making the rugelach.

Combine all ingredients in the food processor fitted with a metal blade.  Process until a gritty powder is formed. 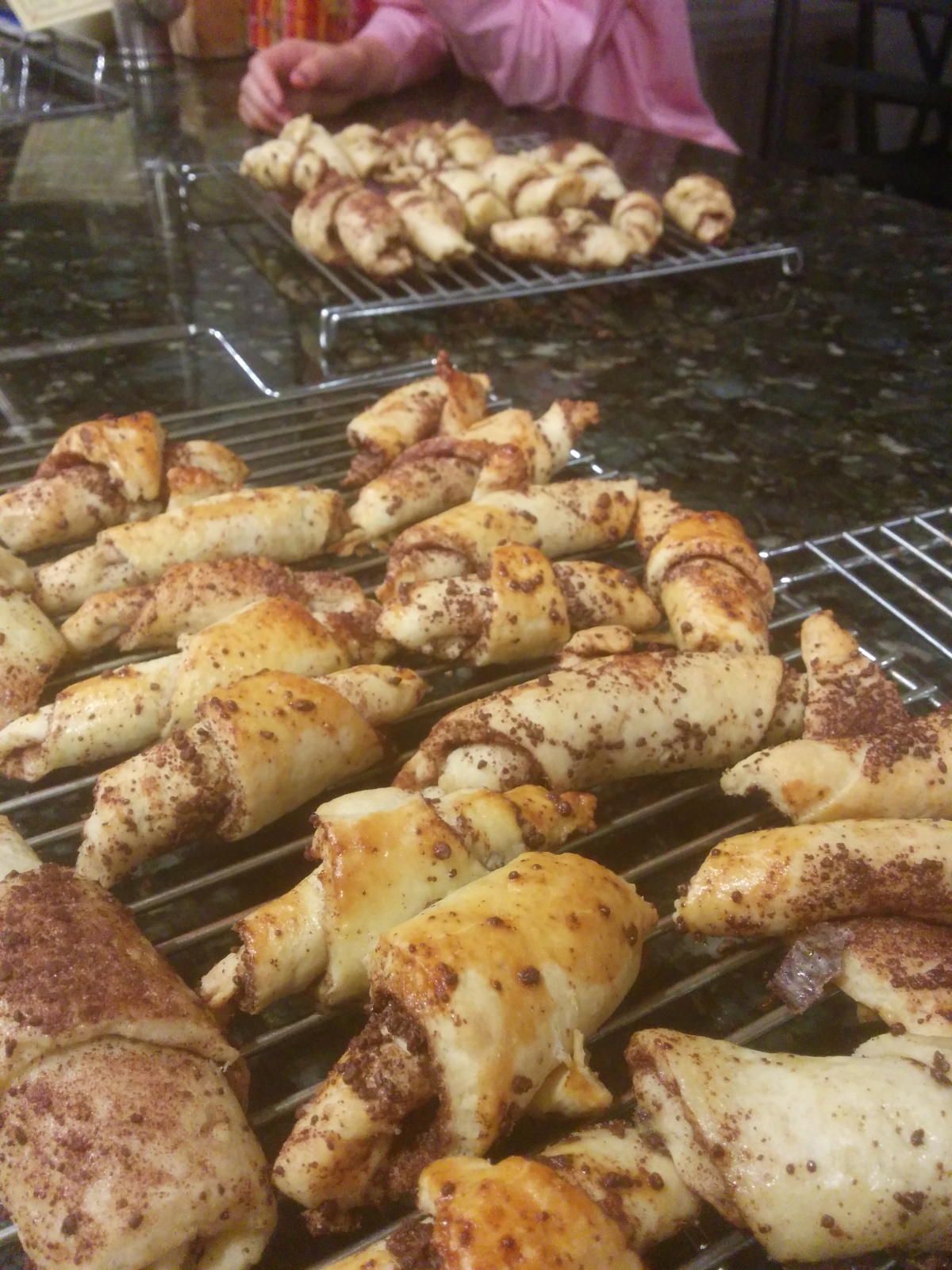 Roll dough into a circle using about 1/5 of the dough at a time.

Position a spice bottle in the center of the circle and spread filling over the rest.  Cut each circle into 8 even slices (like a pizza pie)

Roll each slice of the pie starting from the wide end in towards the center.

Brush with egg and sprinkle with leftover filling