Mazel tov to QC alumna Rivka (nee Lieber) on her wedding this past Sunday to Yosef Wolf of Tuscon, AZ. Mazel tov to her father Captain Stewart Lieber, her mother Sylvia Lieber, and siblings Joel and Gela!

We extend our heartfelt condolences to Hudi and Yossi Newman on the passing of their father. May the Omnipresent comfort you among the mourners of Zion and Jerusalem.

I write to you from Vienna. Tzipah and I are the scholars-in-residence at a Shabbat weekend in Vienna with Bayit. Shortly after arriving, 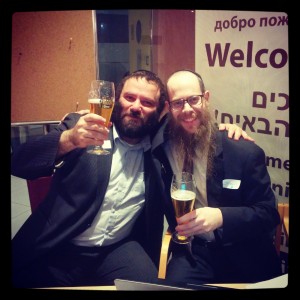 we met a young woman named Tanya, who said to Tzipah, “Do you know Ben?” Without skipping a beat, Tzipah said, “Faulding?” Yup. Small world!

On Monday, we flew to Prague for a little vacation time in advance of the Shabbaton. Tzipah was joking that it was our honeymoon — just 11 years late 🙂

Prague was beautiful, and we had a wonderful time there. We visited the historic synagogues; each one more stunning than the previous. (I will share some pictures next week).

Yet at the same time, our visit was coupled with a feeling of sadness and loss. The synagogues are, for the most part, devoid of congregants. The Jewish community of Prague was decimated in the Holocaust. Together with a powerful wave of assimilation, there isn’t much left.

Prague is truly a beautiful city for tourists, but I found it hard to get over the pervading sense of loss and destruction.

In the Pinkasova Synagogue was the most powerful Holocaust memorial I have ever seen: Names of the victims of Prague and the surrounding areas.

These names were painstakingly written on the walls of the synagogue. Nothing remains but their names.

Upstairs in the synagogue was a small collection of children’s artwork from the Terezin camp. The most moving ones to me were the ones titled, “Dreaming of Home.” Children had drawn images of their dreams of returning home to Prague. My tears could not be contained.

This morning (Thursday), Tzipah and I hopped on a bus to Vienna. I type this email from a hotel in Vienna, where we are together with 50 young Jews from Austria, Belgium, Germany, France, Slovakia, Russia, Netherlands, and Israel.

The future is bright!

Allow me to share one story I heard a few minutes ago:

I introduced myself to a young man named Leonid (Levi) who lives in Karlsruhe, Germany.

“Do you know Heber?” he inquires.

“I was just in Mendy’s Chabad house two weeks ago!” I said (Mendy Heber is the Chabad rabbi in Brookville, Long Island).

Leonid/Levi went on to tell me that he grew up in Moscow, and attended the Chabad-run Camp Gan Yisrael in 1991. Mendy Heber was his counselor, and he kept in touch over the years.

“Mendy set me on the path of involvement in Judaism, and it never left me!”

A spark of light in the darkness of a country devastated by communism.

The night is darkest before the sun rises.