Kabbalah.  Who these days hasn’t heard about the mystical Jewish teachings?
Unfortunately, due to current attempts to popularize Kabbalah, what most
people have heard actually has nothing to do with Kabbalah.

The “Kabbalah” of Madonna, Britney Spears, and other high-profile stars is
at best pure nonsense, and at worst, completely misleading and worthy of
reproach.

What, then, is Kabbalah? 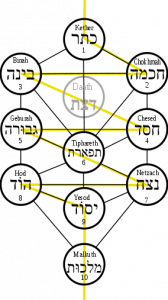 We can glimpse its nature from a brief comment in this week’s Torah reading.

In the Torah portion of Noah we read of the great flood which lasted for 40
days.  We know the basic story: G-d declares to Noah that he is going to bring a flood the likes of which had never been seen before, nor will ever be seen again. He instructs Noah to build a huge ark, which is to shelter his family and all the species of animals for the duration of the flood. Noah spends 120 years building the massive, three-tiered structure. Then, we learn,

“In the 600th year of Noah’s life, in the second month, on the 17th day of the month, on that day, all the wellsprings of the great depths burst forth, and the apertures of the skies opened up” (Genesis VII:11).

Based on the principle that every aspect of the Torah, including the narrative parts, contain eternal life messages, the Zohar (one of the primary texts of Kabbalah) comments that the above biblical verse refers not only to the one-time occurrence of the flood, but also foretells a spiritual flood of knowledge.

These are the words of the Zohar:

The supernal gates of wisdom of which the Zohar speaks are the secrets of the Torah, or the Kabbalah. The “lower wellsprings” refers to secular wisdom.  Note that the year 1840 coincides with the incipient stages of the Hasidic
movement, which is a form of applied Kabbalah. Moreover, England and Europe were then experiencing an unprecedented surge of technological growth and innovation – the Industrial Revolution – which was reaching its peak at about this time.

LET US RETURN to our question with a definition: Kabbalah is the mystical
teachings of Judaism.

By “mystical” I don’t mean that it has to be nonsensical mumbo-jumbo, such
as repeating mantras which one doesn’t understand. Nor does “mystical”
consist of wearing mysterious red-string bracelets to ward off “the evil eye”
(whose sole source in Judaism is the Talmudic condemnation of it as a pagan
act).

Likewise, authentic Kabbalah has nothing to do with the use of horoscopes
(which the Zohar and the codes of Jewish law regard as tantamount to idolatry). Kabbalah is not a free ride of instant gratification providing “solutions” to one’s problems. Rather, Kabbalah is an integral part of Jewish tradition.

Kabbalah is a spiritual flood of knowledge inextricably bound up with Jewish
teachings. We learn from the Zohar that everything – including the Torah itself – has both a body and a soul. Just like a body without a soul is lifeless, so too, a soul without a body is ineffective. The body of Torah is the Talmud and halacha (law). Its soul is the inner dimension and objective of Torah, contained within the teachings of Kabbalah.

Here is how the great Kabbalist Hayyim Vital (1542-1620) puts the matters in
the introduction to Etz Hayyim, a fundamental book of Kabbalah:

“To study the mysteries of the Torah before Scripture, Mishnah and Talmud, is like a soul without a body, lacking efficacy and accountability….  Man must study the wisdom of the Kabbalah, but first the body must be purified. This is effected by practicing the mitzvot, which serve this purpose and are essential.

“Only thereafter can the soul radiate in the body … to understand the mysteries of the Torah and revealing its depth.”

In other words, to study the Kabbalah divorced from thousands of years of
Jewish tradition is to separate soul from body.

JUDAISM IS AT ONCE A wonderfully practical – yet at the same time metaphysical and mystical – religion. Our religion is a woven tapestry of knowledge, both esoteric and exoteric. To claim that the Talmud and halacha are merely suggestions – but not an integral part of Judaism – is to invent a new religion.

Judaism has always been multi-faceted, each part bearing equal importance.
Although it is true that in our day and age we have seen a surge of interest in spirituality and mysticism, it bears repeating that Judaism does not believe in hocus-pocus. Nor do we believe in the spiritual without the physical.

In other words, Kabbalah cannot be separated from Judaism. A Jew’s goal in this world is to connect the spiritual to the physical, through the performance
of action-based mitzvot. That is why our Sages assert that “The action is the main thing” (Ethics of the Fathers, I:17).