Tell me something about yourself. Likes, dislikes, hobbies etc.
I love biking. With a helmet, of course! I love music, playing it, listening to it. I’m trying to start a band and I need a bass player. 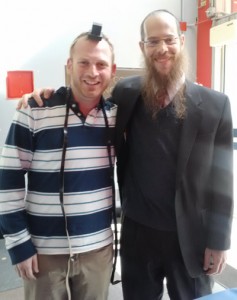 You should look them up.

Have you taken the MCAT’s already?
No, I will take them this summer.

So that means you won’t go to medical school until Fall 2015. What will you do until then?
I want to work part-time at the Tesla showroom in the Roosevelt Field mall. Tesla is the first ground-up 100% electric vehicle.

What do you mean by “ground up”?
There are other electric vehicles, but they were built from gas vehicles; Tesla was built specifically for a battery.

Why do you want to work there? Are you a car guy?
Not in particular. But I’m a big fan of the Tesla; I’ve been following it for the last year or so.

What will you the rest of the time, since it’s only a part-time job?
I recently started working for a charity called “Martial Arts Therapy.” It’s a non-profit that gives free martial arts lessons to kids with cancer and other severe illnesses.

You do martial arts?
No, I’m going to be doing mostly fundraising and grant writing. I also want to train for the Ironman.

So your sister Laura was the Chabad student President when she was at QC. I remember that you came for Shabbat one time when you were in high school. What do you like most about QC?
You get the best of both worlds. Because it’s a commuter college, you really get a diverse group, including older people who are switching their careers. You get a lot of people from different walks of life. But there’s still a lot going on. There’s always a lot going on on campus. You’re not completely engulfed by the college; you can step out of it and experience other things.

What’s your favorite Israel memory?
I don’t know if I can pinpoint a specific memory, but I think my favorite thing to do is roam the streets. The forest. Anywhere.

What’s your favorite Jewish food?
I don’t know; I don’t really eat so much traditional Jewish food. But let’s go with my mom’s potato kugel.

Who has always been there for you?
My sister. And my parents.

If you could go to lunch with anyone, dead or alive, who would it be?
I’d have to say Menachem Begin.

Why?
He did what he thought was right, regardless of what people thought or what the consequences were. He’s been kicked out of the Kenesset more than anyone. He once got banned for three months. He made a harsh speech against the government for accepting reparations from Germany.

What advice would you give to a freshman at Queens College?
I think a lot of students — especially Jewish students from the NY area — feel like they’re here by default, and it’s not worth being part of the community. You’re not going to get the real college experience, and it’s not even worth trying. But really, Queens College has a lot to offer, and you have to keep  your eyes open.